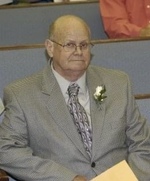 Bobby, also known as "Mr. Bob" to the auto parts world, was known for his auto parts knowledge. He had been in the business for well over 50 years. He was the go-to man and will be greatly missed among his colleagues and friends.

The family will be receiving friends Monday, January 17th from 12-2 pm at Hernando Funeral Home. Graveside service to follow at Hernando Memorial Park.